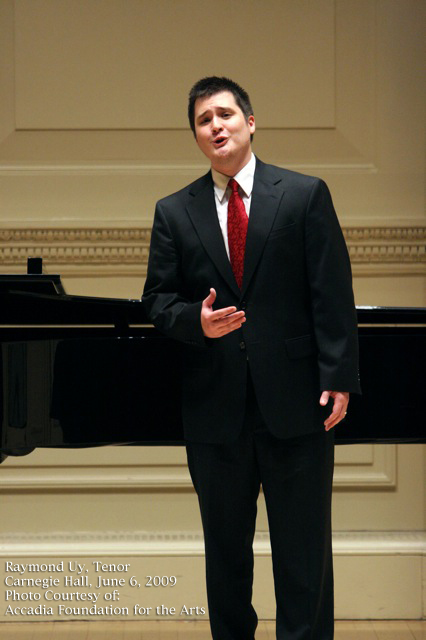 Dr. Uy was a 2017 Grammy Music Educator of the year quarterfinalist, and a 2018 Hanover District Teacher of the Year.  He has been included in "Who's Who Among America's Teachers" for his work over the years as a public school music teacher and adjunct college voice instructor.

His recent publications include "Heterophonic Vocal Music Training" in the International Choral Bulletin (April 2017), and "Equity and Diversity in Music Education:  Toward a Critical Trait Theory" in TEMPO magazine (January, 2017).

As an international vocalist, Raymond Uy has performed tenor roles with the New York Lyric Opera, Garden State Opera, Delaware Valley Opera, and the Lyric Opera of Los Angeles, as well as in ensembles with the Opera Festival of NJ.  Among his favorite places to perform as a soloist are Carnegie Hall, Lincoln Center, Symphony Space on Broadway/95th, and across Europe.
In addition, he has sung in many collaborative performances between the choirs of Westminster, and orchestras that include the New York Philharmonic (Kurt Masur), Philadelphia Orchestra (Wolfgang Sawallisch), and the New Jersey Symphony Orchestra (Z. Macal).  One such performance (Dvorak’s Requiem) culminated in a Grammy Award winning recording (2001).
Dr. Uy has studied voice in Tuscany, Italy and holds a Doctor of Musical Arts degree from Boston University (2018), a Master of Music degree from the Eastman School of Music (2003), and a Bachelor of Music degree (Summa cum Laude) from Westminster Choir College (2001).
Apart from music, Dr. Uy worked for the NFL photography department, and had served for several years as the Post-Production Supervisor for Toyota's National Headquarters in Los Angeles, where he developed video for broadcast, websites, and corporate communications.
This webpage will have important information about concert times/dates.  In addition, there will be many blogs posted throughout the year.  We'll discuss all different kinds of music (I enjoy all genres of music), including many of the contemporary artists you know and love.  We'll also use this page for nominations and voting opportunities.
MONDAY:  MJS Strings
TUESDAY:  MTV Kindergarten, 4th Grade, & Strings
WEDNESDAY:  MJS Chorus
THURSDAY:  MJS Strings and 6th/8th Grade Chorus
FRIDAY:  MJS 7th/8th Grade Chorus and Strings

There are no current assignments.

You can add a copyright statement or legal disclaimer in this area if necessary.
Copyright © 2002-2020 Blackboard, Inc. All rights reserved.